Turkey bacon is often praised as a healthier alternative to traditional pork bacon. This article compares the nutritional profile of turkey bacon to regular bacon, determining whether it really is a healthier choice.

Here’s a comparison of the nutrient content of two slices (1 ounce or 28 grams) of turkey and pork bacon. 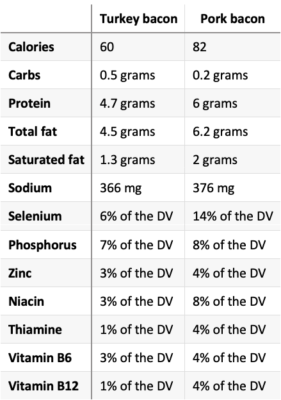 Turkey bacon has roughly 25% fewer calories and 35% less saturated fat than pork bacon. However, it’s still a relatively high-calorie food, with 30 calories per slice — more than half of which comes from fat.

Many turkey and pork bacon products contain synthetic preservatives — especially nitrates or nitrites — which slow spoilage, enhance the pink color of the meat and contribute to taste.

It’s best to opt for organic products because they do not contain chemical preservatives. Instead, they often use celery powder — a natural source of nitrates — as a preservative instead.

If you don’t select reduced-sodium bacon, two ounces of turkey bacon has more than 1,900 milligrams of sodium. The same amount of pork bacon contains roughly 1,300 milligrams.

While turkey bacon may be lower in calories than pork bacon, you should still eat it in moderation. Follow these tips for the healthiest outcome: 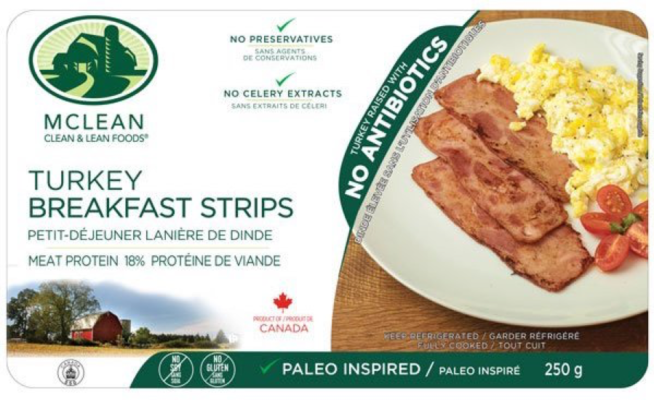 Mclean Turkey Bacon was the best option I found at the grocery store. It contains no preservatives, no nitrates, no antibiotics and a very simple ingredients list of Turkey, honey, and sea salt.